Don’t leave us behind

The new Sydney Metro is a driverless train from Sydney’s Hills area to Chatswood. It is meant to be accessible for people with disability. CID’s advocacy group tested the Sydney Metro train and stations and found serious safety and access issues.

“The doors close too quickly and we get left behind. It’s not safe.”

“Without the staff on the train, we won’t feel safe.”

The latest from our campaign

In late November 2019, we met with Transport for NSW and the Minister for Transport, Hon. Andrew Constance MP.

Minister Constance told us they would work with us to address our concerns in the next two weeks. CID has reached out many times to Transport for NSW without response.

Please email or phone the Minister and ask him to keep his promise that Transport for NSW will work with us to fix the Sydney Metro safety issues raised by the CID Advocacy Group. Find out how below. 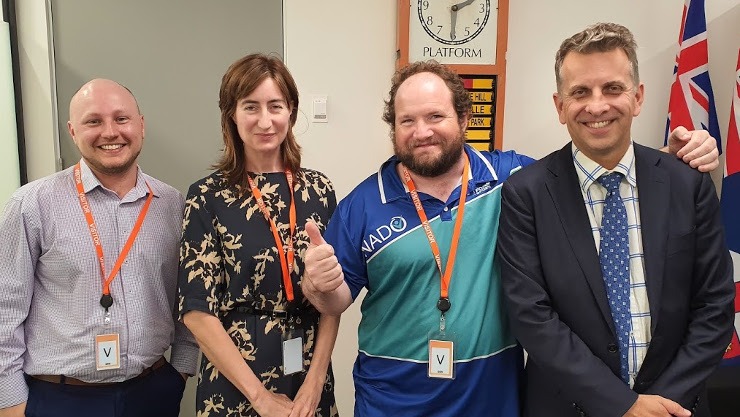 We did action research and put it together into a report, which we sent to the Minister for Transport, Andrew Constance, with 17 recommendations.

There are three key issues we really want to be changed with the Sydney Metro train to make it safer and more inclusive for people with intellectual disability like us.

1. Guarantee staff on every train and at every station

Transport for NSW (TfNSW) has previously told us that they plan in the future to reduce staff by 50 percent.

The staff are really helpful, friendly and make us feel safe. Without staff on every train and every station, we won’t have anyone to turn to if things go wrong or we need help.

We want a guarantee there will always be staff on every train and at every station.

2. Keep the doors open long enough for everyone to get on the train

When we tested the train some of us were left behind because the doors closed too quickly. It is frightening to be left behind.

The Minister said that the doors remain open for 30 seconds, but we timed it and they are only open for 11 seconds. This is not enough time to get on the train.

It doesn’t matter the reason why you need extra time, you just need to know there is enough time to get onto the train safely.

We want the doors to stay open long enough for everyone to get onto the train.

3. Make travel speeds safe for everyone so we don’t fall over

The train stops and starts too quickly, it makes us almost fall over. It is very unsafe for many of us who have balance issues. We could get injured.

We want the trains to be smoother when taking off and stopping.

See our full list of 17 recommendations on other ways to make the Sydney Metro safer in our report.

How you can help

Please phone or email the Minister for Transport, the Hon. Andrew Constance MP.

Ask him to read the CID Advocacy Group’s report on the Sydney Metro and address 3 key issues:

Only with your help can we get the Minister to make the Sydney Metro accessible and safe for everyone.

Tell him that safe, inclusive and accessible transport is a basic human right. Anthony successfully advocated to stop transport changes that would discriminate against him and his friends with intellectual disability. Shannon is an advocate for improving transport and mental health for people with disability. Find out what makes… The Government should not silence our voice

My name is Anthony Mullholland and I am an advocate with Council for Intellectual Disability.

Read more
See all our stories

We advocate for the rights of people with disability

Issues that matter to us